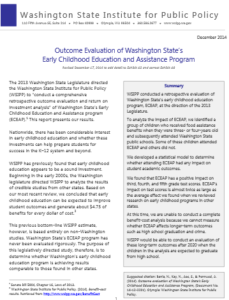 In 2014, the state legislature asked the Washington State Institute for Public Policy (WSIPP) to conduct a retrospective outcome analysis of the Early Childhood Education and Assistance Program (ECEAP), looking back to 2003-4.  The study compared 3rd, 4th, and 5th grade test scores from children who had attended ECEAP to those of similar children who had not.

The results were impressive and sustained.

Because the study looked primarily at 3rd-5th grade test scores, the researchers were limited to looking at ECEAP before 2009.  Today ECEAP looks even better than in 2008 – 33% more classroom hours, restrictions on caseload for family support workers, greater emphasis on research-based curriculum and assessment, and participation in Early Achievers.

The study used participation in ‘Basic Food’ as a comparison group for the non-ECEAP kids, which meant that the overall income level and percentage of native English speakers was higher than the general ECEAP population, and that an estimated 20-25% of those kids may have attended Head Start.  Given that ECEAP closely mirrors Head Start and that most children are in programs who provide both, outcomes are likely to be higher for ECEAP if those kids were separated out of the comparison group.

When ECEAP was established, the legislature recognized the challenges faced by this high-risk population, and created a program that addresses the needs of the whole child – a high quality classroom with individualized learning plans, attention to the health of the child, and fully engaging the family to ensure that the child is supported and gains are sustained.  ECEAP is one of the few state pre-k programs who adopted this model, and this study proves that it works.