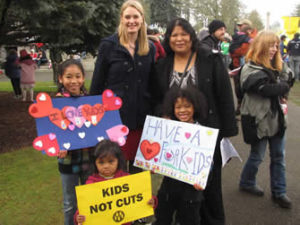 The WSA Parent Ambassador Program, established in 2009, is made possible with support from WSA as well as our advocacy partners at MomsRising, Child Care Aware of Washington, Save the Children Action Network,  the Perigee Fund and the Ballmer Group. The parents selected for this program participate in a yearlong parent advocacy and leadership training program. They receive training on communications, leadership, legislative advocacy, racial equity and justice, grassroots organizing, and financial literacy and are responsible for training parents in their local programs and participating in advocacy efforts on both the state and federal level. Parents receive 16 college credits for completing the program.

Over the years Ambassadors have played a pivotal role in defeating the Governor’s plan to drastically cut child care assistance and ECEAP, and have led the charge for improvements to the child care subsidy system, expanded early learning opportunities for children in the child welfare system, and the expansion of ECEAP to all eligible children. Ambassadors have provided regular testimony on key issues that impact children and families including funding for early childhood education, TANF, and WAKIDS—a kindergarten readiness assessment process. Ambassadors have been featured in newspapers, TV and radio including coverage on KIRO 7, NPR, KING 5, and KHQ.

Because of the buzz surrounding the program within the early childhood community, ambassadors have been requested to speak at National Head Start Association institutes and state training conferences, conducting successful training in Washington DC and Pennsylvania. They trained other parents how to give effective testimony, mobilize members of their community, and write effective letters to the editor — several of which were published. The Parent Ambassador program has been expanded to six other states as part of other Head Start Associations and Educare, and it is a founding member of the United Parent Leaders Action Network.

In Washington State there is considerable energy around early learning, and the need to have parent voices included in this process is more important than ever.

Often parents, especially low income parents, are left out of critical discussions. The Parent Ambassadors’ Program provides opportunities for parents to be heard. Here are just a few examples of how parent ambassadors give real voice to their concerns and opinions:

Parent Ambassadors go through an extensive year long advocacy training program. Parents learn the basics of government, about specific pieces of legislation, how to contact their lawmakers, how to provide effective testimony, social media advocacy and how to engage parents in their community. Parent Ambassadors also receive training on important leadership skills – communications, team-building, goal-setting, conflict management, etc – that enable them to be more effective leaders and advocates.

Parent Ambassadors by the Numbers