2009 was the inaugural year for the WSA Parent Ambassadors program. Our 2009 crew set a great standard for future years, and had an impressive record of advocacy success!

Our Parent Ambassadors had many successes in 2009, and we wanted to share just a few:

Ambassadors Mobilize to Prevent Cuts to ECEAP
The most tangible success so far has been the work ambassadors did in preventing deep cuts to ECEAP—our state’s preschool program. Because of their work the program was only cut by a less than 2 percent, despite the budget crisis in our state. Ambassadors did the following:
Educated parents and staff in their local programs about the legislative climate.

Ambassadors Help to Develop Child Care Subsidy Legislation
Many of our ambassadors have found that the child care subsidy system does not work for them and their families. They brought their concerns and policy recommendations to the Director of our state’s department of early learning several months ago via a conference call. As a result of their work the department is in the process of drafting legislation to make the changes requested by our ambassadors including changing the authorization periods and capping co-payments.

Ambassadors Have Seats at Many Key Early Learning Tables
One of the most effective elements of the parent ambassador program has been the success we have had in getting the “parent voice” at key decision making tables. Here are just some examples:

Ambassadors took the lead on creating a ‘Fall Blitz’ effort to train parents in their local area and educate parents about issues important to low income families and ways to advocate.

Ambassadors worked in partnership with Every Child Matters to create an “ECEAP Champion” event in Bremerton in October honoring the work of Representative Kathy Haigh.

Eight ambassadors went to Washington D.C., where they met with each of their lawmakers, developed their own training session for other parents at the NHSA Leadership Conference, and provided strategic comments to key early childhood leaders including Joan Lombardi, the new child care administrator, the new head of the Centers for Medicaid and Medicare, and legislative staff.

Another ambassador arranged for his Congressman to visit his own program.  As a result of the meeting, Rep. Larsen told our ambassador that he has a much better picture of how Head Start works with the whole family and not just the child.

We had great Parent Ambassadors for 2010, from all over Washington.  Many have testified in Olympia on ECEAP and Working Connections issues, and they’ve all visited their legislators!  Congratulations to our 2010 Ambassadors:

The most impressive accomplishments of the 2010 parent ambassadors were the legislative victories. We achieved significant results despite a more than $3.8 billion state budget deficit. Parent Ambassadors helped to secure victories in three major areas: child care subsidy reform, ECEAP entitlement, and funding. Their work was integral to the passage of these key policy changes and in minimizing cuts to early learning.

Parent Ambassadors were the driving force on House bill 3141, which makes significant improvements to the child care subsidy system.  The legislation extends the child care subsidy redetermination period for families enrolled in Head Start, Early Head Start, and ECEAP.   Under current law parents receiving child care subsidies face multiple hurdles and red tape to maintain their eligibility. Often families are reauthorized every 3 months.  This leads to families being knocked out of the system and their child losing access to quality child care.  This new policy change will put the child at the center of the system and build in more stability for providers and parents.  The victory is all the more remarkable because this policy change had been sought by advocates for more than 15 years and was initially opposed by the Governor.

Ambassadors were involved on many levels:

In most legislative sessions the passage of the child care subsidy reform bill would be enough.  But parent ambassadors also helped to secure another piece of landmark legislation, House bill 2731, which will make our state’s preschool program an entitlement for all low income children by 2018.  This legislation prohibits the state from cutting ECEAP in the next legislative session and requires lawmakers to begin providing funding to serve the more than 4,000 eligible kids sitting on wait lists.  Ambassadors were successful in discussing the benefits of high quality early learning programs and the need for funding increases. In two examples, ambassadors from our Spokane ECEAP program met with all of the key early learning champions in the Senate in the beginning of the session and in the House parent ambassadors met with the key sponsor of the bill, Rep. Roger Goodman (D-Kirkland) to ensure that the legislation built off of ECEAP with full comprehensive services and parent engagement.  It is a testament to the hard work and effectiveness of our ambassadors and other early learning advocates that this commitment was made by the legislature in a period of such financial turmoil.

While many states made cuts to children’s services and early learning, Washington State did not make any deep spending reductions to early learning.  One of the main reasons that cuts did not take place was the Parent Ambassador Program.  Ambassadors successfully fought off large proposed cuts to both ECEAP and child care.  Our ambassadors participated in multiple events and activities sponsored by our coalition.  Several of our ambassadors became so effective in their presentations they were called upon regularly by other coalition partners for speaking roles and quotes were included in various publications.

Our 2011 Parent Ambassadors are off to a fast start this year. Already Ambassadors played a pivotal role in defeating the Governor’s plan to drastically cut child care assistance. Ambassadors have provided regular testimony on key issues that impact children and families including funding for early childhood education, TANF, and WAKIDS—a kindergarten readiness assessment process. Ambassadors have been featured in newspapers, TV and radio including coverage on KIRO 7, NPR, KING 5, and KHQ.

Our 2012 Parent Ambassadors got their first training during the huge snow and ice storm in January, and they’ve managed to channel that crazines and energy into some incredible advocacy and success already. Parents have testified before committees in Olympia on ECEAP, Working Connections funding, our 12-month subsidy eligibility bill, and Universal Pre-k. They’ve made themselves a constant presence with their legislators, visiting the Capitol for Have a Heart for Kids Day, bombarding them with thoughtful emails and calls, and managing to get many, many letters to the editor published in their local newspapers.

The 2013 Parent Ambassador team did a fabulous job. They were been at our State Capitol in Olympia testifying on key issues, advocating with lawmakers, and helped put together an amazing Lobby Day in March. They have had letters to the editor published and have completed “teach backs” in their local communities. Ambassadors have already been part of some important successes including the passage of two early learning bills that will improve the early childhood system. While the budget is not yet completed ECEAP is well positioned to receive a meaningful increase in the state budget.  Thanks to the W.K. Kellogg Foundation Ambassadors are also receiving financial literacy training and are participating in a pilot IDA program in which they are saving for specific career goals including college attendance. We would like to thank our core funder the Peppercorn Foundation for their continuing support of the Parent Ambassadors Program and helping us launch this amazing program.

We have chosen our Parent Ambassadors for 2014! These parents will be going through a yearlong parent advocacy and leadership training program. 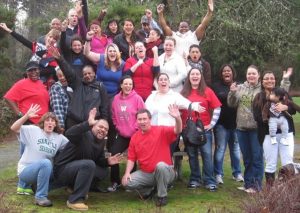 Parent Ambassadors 2020 began their year long journey in March and are excited to learn great advocacy and leadership skills. We have parents from all around Washington State and are excited to see how they grow over the next year.

This year with COVID-19 changing the ways we interact and do our training it is already proving to be interesting. With social distancing protocols in place, we are being creative in the ways we are all working together this year. Our parents are being nimble and flexible to the changes happening in our nation and specifically in our state as they are on their Parent Ambassador journey.